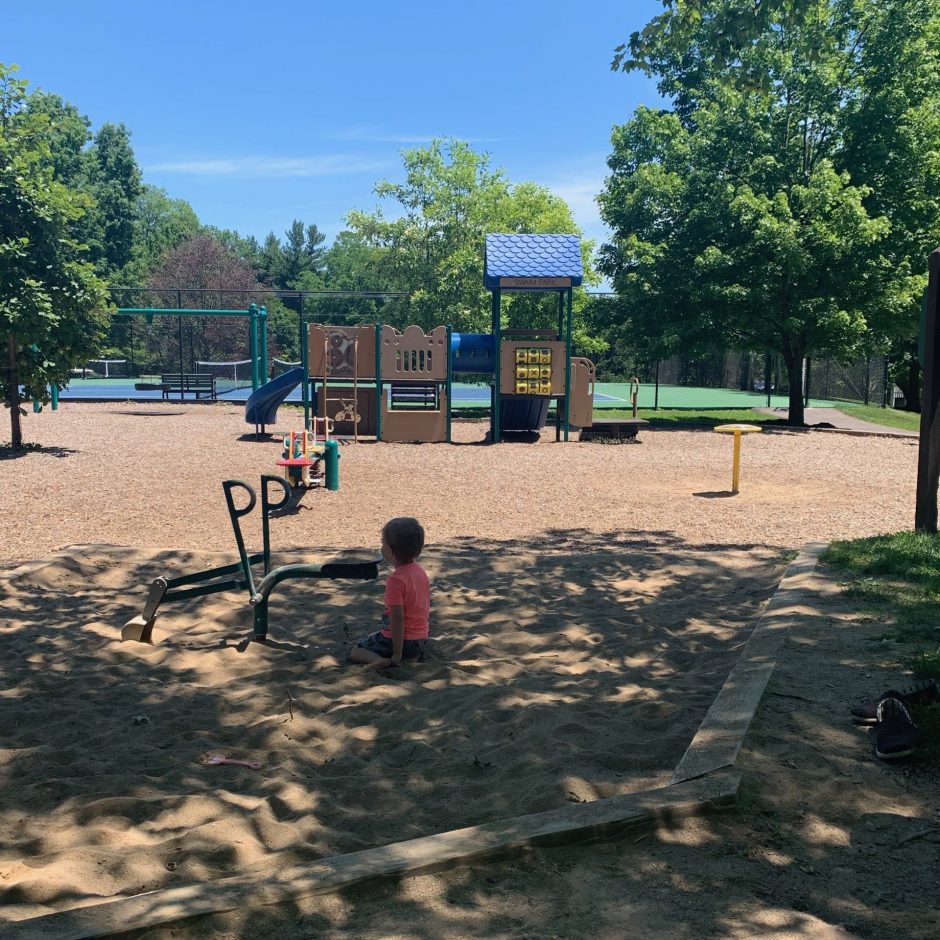 And the sandbox has a built-in digger, too.

Swaim Park is a lovely, well-manicured park with a nice playground located next to downtown Montgomery, Ohio. This playground is a great spot to take toddlers and primary school aged kids to run and play. Plus it’s got a sandbox with a really cool sit-on digger. Swaim Park is located off Cooper Road, just west of downtown Montgomery, Ohio. In addition to the playground, there is a walking trail, pond, tennis and basketball courts, and sand volleyball. There are two parking lots – one off of Cooper Road; the other off of Zig Zag Road. The playground sits towards the back of the park, closer to Zig Zag Road. This playground is great for toddlers and up.

The playground at Swaim Park consists of 3 play structures, a see saw, swings, a hanging merry-go-round, and a sandbox. Most of the playground structures are a bit older, but still in good working order. There’s a good variety of things to play on, and enough selection to entertain kids from ages 2 and up. The ground is covered in mulch, so it’s not the best spot for kids who are still crawling.

The 3 play structures are best described in “3 Bears” terms. First, the baby bear-sized play structure is perfect for younger toddlers. My son could easily navigate this play structure at 20 months old. There are a few features on the ground level, but because the ground is covered in mulch, it’s best for kids already walking.

Second, the mama bear-sized play structure is a bit higher off the ground and a bit more advanced. It has two slides, a bridge, handle monkey bars, and other interactive features. It’s a great spot for toddlers and preschoolers to play.

Third, the papa bear-sized play structure is the newest structure on the Swaim Park playground. It’s more open, has more complicated transitions to different platforms, and has a pretty tall slide. The playground states that it is designated for kids ages 5-12, but my son is able to hold his own at (almost) 4 years old.

A big highlight of the Swaim Park playground is definitely the sandbox with the built-in sit-on digger. It’s a small sandbox, but it’s the digger that makes the sandbox such a big hit. The digger can be a bit cumbersome to operate. At 3.5 years old, my son can just about maneuver it by himself. The sandbox itself can fit about 6 kids with clearance for the digger.

The sandbox is the most shaded spot on the playground. There are also two benches nearby – making this a great spot to sit down and watch the kids dig around in the sand.

Towards the back of the playground are the swings. Swaim Park has four swings total – 2 bucket and 2 regular swings. There is also a tire swing, which can be found along the side of the playground nearest to the tennis courts.

The not so greats

Not shaded. While there are many trees throughout Swaim Park, the playground itself is not shaded, except for a small corner where the sandbox is located.

No fence. The playground is not fenced in, but it is located far from roads and traffic, and is boarded by houses in the back.

It’s got mulch. The playground is covered in mulch, which frankly, isn’t my favorite. Mulch gets into sandals and shoes, and it makes it difficult for the youngest children who aren’t walking yet to participate in the fun.

It has a pond. Swaim Park is also home to a mid-sized pond. While the pond isn’t right next to the playground, it isn’t too far either. Again, not a dealbreaker, but something to keep in mind.

Overall, Swaim Park has some pretty scenery, is a pleasant spot to take a walk, and has a nice playground with a variety of things to play on. It’s not the latest or greatest, but all around nice. Plus it’s got that cool sit-on digger in the sandbox.

More from One Little Small