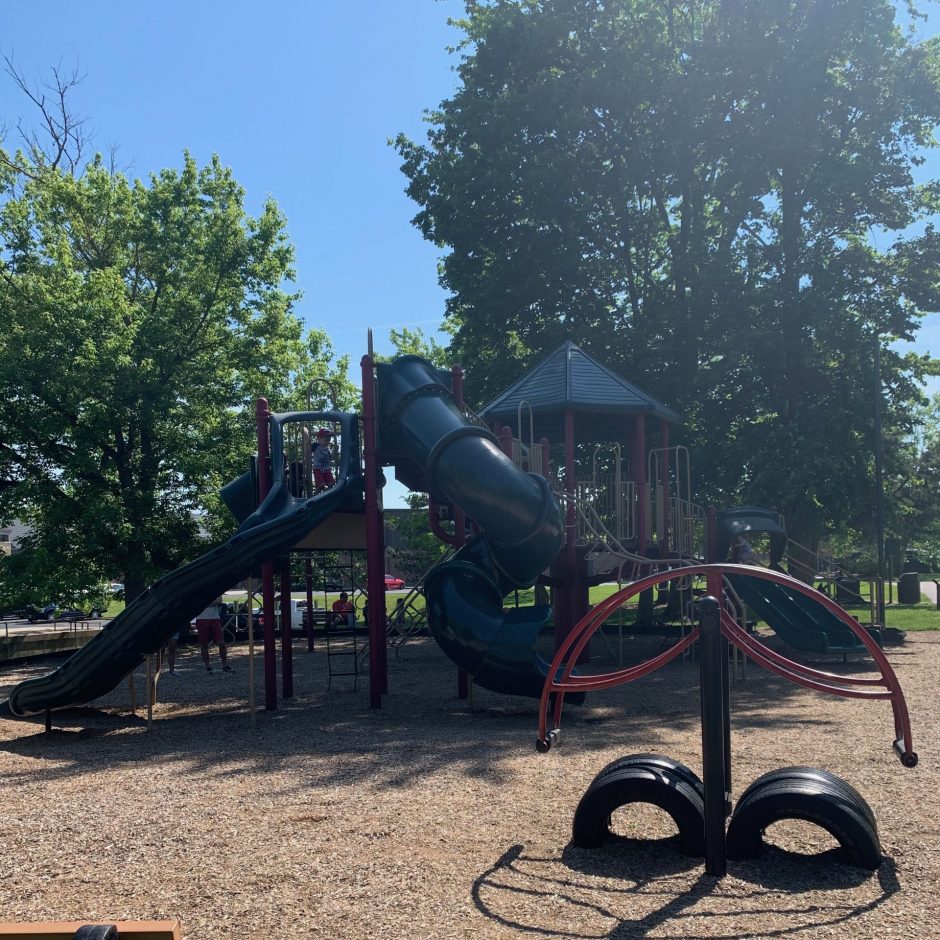 A great spot to play and enjoy nature

Blue Ash Nature Park is a great choice if you’re looking for some pretty scenery, easy walking trails, and a variety of playgrounds. Located behind the Blue Ash Recreation Center, this park has 5 playgrounds, 6 picnic shelters, 2 restrooms, an amphitheater, and both paved and gravel walking paths. It’s a great spot to take the kids to play or go on a walk with the dog – or both! The main parking lot for Blue Ash Nature Park is located to the back of the Blue Ash Recreation Center parking lot. There is also a secondary entrance and parking lot located on the other side of the city building. When you enter the park by the rec center, you will see the largest playground to your right and a picnic shelter to your left. Next to the picnic shelter are the swings. Keep walking down the paved path and you will see the restrooms and concession stand building before you reach the amphitheater.

The next section back under the tree line is the toddler playground and sandbox to your left and a second playground to your right. Keep on the path to pass picnic shelters, a built-in corn hole set, and the other restrooms. In the woods, before you reach the other parking lot, you will see the last of the playgrounds.

There are three playgrounds designed for older kids. The playgrounds can be navigated by older toddlers, but these play structures have large open spaces higher up, making it not ideal for smaller ones who aren’t as steady on their feet. As a high-strung mom, these playgrounds would make me super nervous when my son was younger and a bit woobly on his toes.

The first and largest playground is right off of the rec center entrance. It consists of two main levels, with several slides and ladders to access each level. A younger kid could have fun on the lower level of this structure, but I would recommend the higher level for older kids. There are also a few smaller structures around this playground.

The second playground is located towards the back of Blue Ash Park and across from the sandbox. This playground has a transportation theme, with pretend vehicles to drive on the ground level. It’s a similar layout to the first playground, but smaller. There are several big openings up top towards the curly slide.

The toddler playground at Blue Ash Nature Park is dinosaur themed. It has a ride-on dinosaur, a smaller climbing structure, and my son’s all time favorite – a big, green dinosaur slide. The flooring is mulch, so this is not the play space for crawlers, but an 18 month old would have fun.

Next to the toddler playground is a covered sandbox. The sandbox is big enough for 5-6 kids comfortably. This is a sandbox at a park in a wooded area, so there are lots of twigs and leaves and sometimes bugs in the sand.

Located towards the rec center entrance at Blue Ash Nature Park are the swings. There are only four – two regular and two bucket, but there are so many playgrounds at this park that the lack of swings doesn’t seem to pose a huge problem. There is also a tire swing further back in the park.

There is a long paved path that stretches back to the amphitheater. From there, the paths form two looped trails – essentially creating a funky-looking figure eight. The paths through the woods are gravel, but these are some of the easily trails to navigate in the area. The trails are short and are relatively flat. There is also currently a story walk (pages from a children’s book displayed along a pathway), which is always a fun activity with kids.

There’s a cute little bridge over a creek that makes the perfect spot for taking photos. The creek isn’t easily accessed from the trails, but it’s not the spot for creeking. There is an area where you can stand near the creek and admire the little waterfall.

The not so greats

Blue Ash Nature Park is, as the name suggests, a nature park. It has trees, leaves, twigs, mulch, bugs and other nature-y stuff. If this isn’t your jam, than this probably isn’t your spot.

Overall, Blue Ash Nature Park is a great spot with a variety of shaded playgrounds to choose from. It’s best for toddler-aged kids and up. This is also a great park to find easy beginner trails to explore with your kids.

More from One Little Small